Known as the birthplace of the American Constitution, Philadelphia draws dozens of school and tour groups who want to see its many landmarks from U.S. history. And what better way to get your group around the city than with a bus rental? Whether you plan to tour Independence Hall or grab some cheesesteaks and see the Liberty Bell, Shofur can provide a comfortable charter bus rental with WiFi, reclining seats, and more to take you around the city on your time.

Just give us a call at 1-800-436-8719 to receive a free, no-obligaton quote for your private bus rental in Philly. Meanwhile, keep reading to learn about a few of the attractions you can experience:

Why Rent a Bus in Philadelphia? 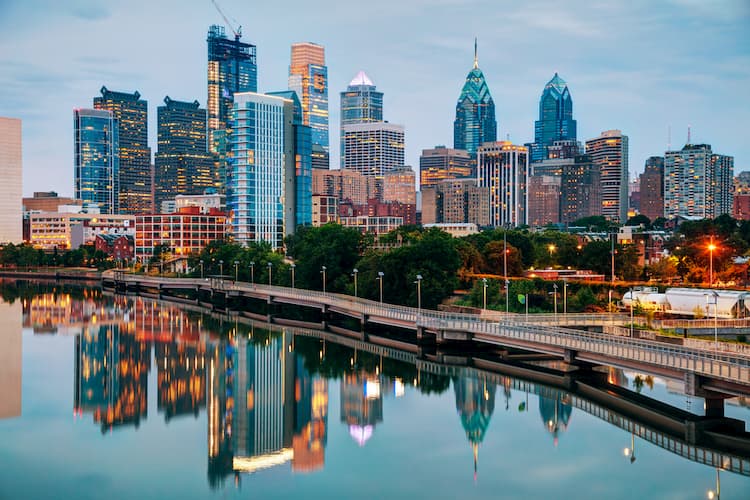 Philadelphia’s narrow historic streets make the city prone to traffic jams, so you’ll need to think carefully about your transportation if you’re traveling with a large group. Here are a few options you can consider: 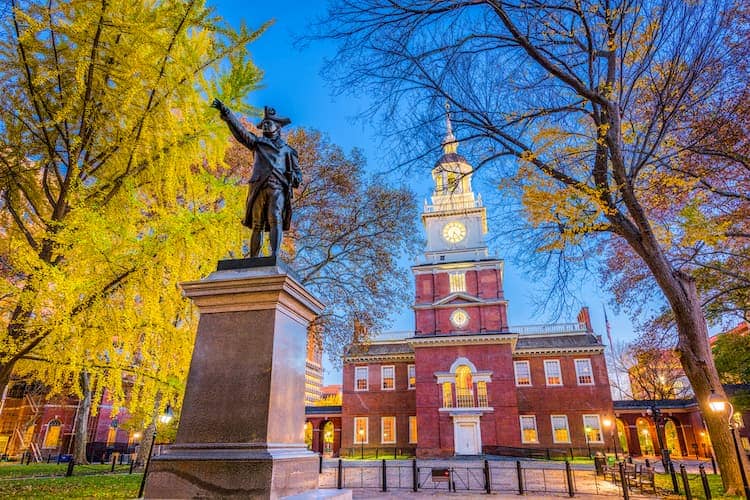 As the city where the Declaration of Independence was signed and the Constitution was written, Philadelphia has played a pivotal role in U.S. history. If you want to experience the city’s landmarks, your charter bus can drop you off at sites like the Liberty Bell and Independence Hall.

The Liberty Bell was commissioned in 1751 to hang in the Pennsylvania State House, now called Independence Hall. However, it didn’t truly become famous until the 1830s, when abolitionists adopted it as a symbol of their movement because of its inscription, "Proclaim Liberty Throughout All the Land Unto All the Inhabitants thereof.” The bell cracked in the 1840s and could no longer ring, but it is still a powerful symbol and Philadelphia landmark.

The LIberty Bell’s former home, Independence Hall, stands nearby. Completed in 1753, the building didn’t become famous until the Second Continental Congress signed the Declaration of Independence there in 1776. Eleven years later, the United States Constitution was written and signed in the same room. Your group can only see the room where it happened as part of a tour, but almost any visitor to Philadelphia will agree the tour is worth it.

Charter bus parking: Motorcoaches are not allowed to park on Philadelphia’s streets. They can only load or unload on the street and then park at a designated facility. Therefore, your bus driver should drop you off at the Independence Transportation Center, which has loading and unloading spaces for buses near the Liberty Bell, and then park at Callowhill Bus Center (114 Callowhill St, Philadelphia, PA 19123).

Charter bus parking: Parking regulations for Independence Hall are the same as for the Liberty Bell. Your bus will need to head to the Independence Transportation Center, where your group will have 10-15 minutes to unload before your driver heads to the Callowhill Bus Center to park. 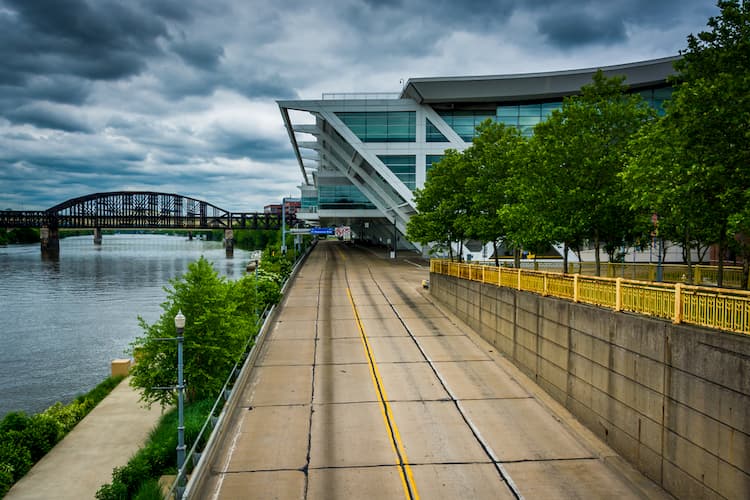 If you’re in Philadelphia for work instead of sightseeing, your charter bus driver can help your corporate group get to the Pennsylvania Convention Center for trade shows or conferences. This massive convention center can hold up to 30,000 people, is fully wheelchair accessible, and has wireless access and in-house catering.

As convenient as it is to eat at the convention center, though, you can’t go to Philadelphia and not treat your coworkers to one of the city’s classic cheesesteaks. If you need a ride to Pat’s King of Steaks or Geno’s Steaks so you can compare these legendary restaurants, your charter bus driver has you covered there too.

Charter bus parking: Your group can unload on N. Broad Street at Cherry Street. Your charter bus driver can then park at the Callowhill Bus Center. 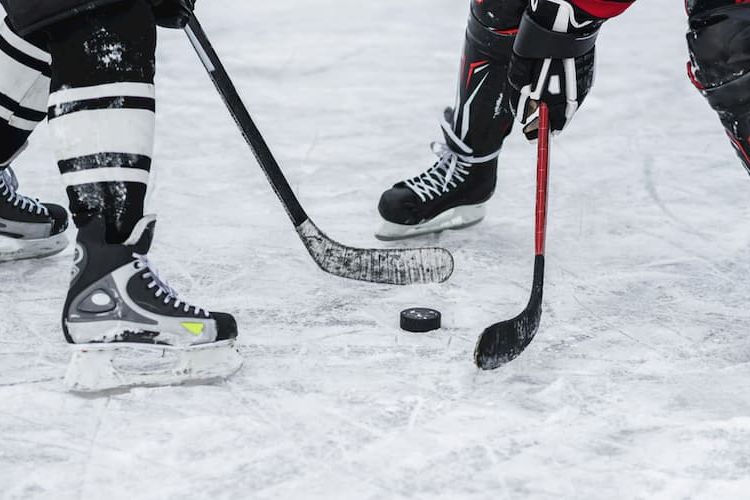 Philadelphia provides a home for many beloved sports teams, like the Eagles, who won the Super Bowl in 2018 and have a devoted fanbase that starts tailgating hours before games begin. Just a few minutes away from the Eagles’ stadium, the Phillies run the bases while being cheered on by their one-of-a-kind mascot, the Phillie Phanatic.

If you’re more of a basketball or hockey fan, the 76ers and Flyers both play at Wells Fargo Center, only half a mile from the Phillies’ and Eagles’ stadiums. But no matter which team you cheer for, you can gather your group of sports fans, load your coolers onto the charter bus, and let a professional from Shofur serve as your designated driver.

Charter bus parking: Lincoln Financial Field is surrounded by public parking lots. Bus parking is available in Lots M and N. It costs $40, and you can prepay online.

Wells Fargo Center (home of the 76ers and Flyers)

Charter bus parking: Your bus driver can drop you off along Broad Street and then pay for parking in the same M and N lots used by the other stadiums. 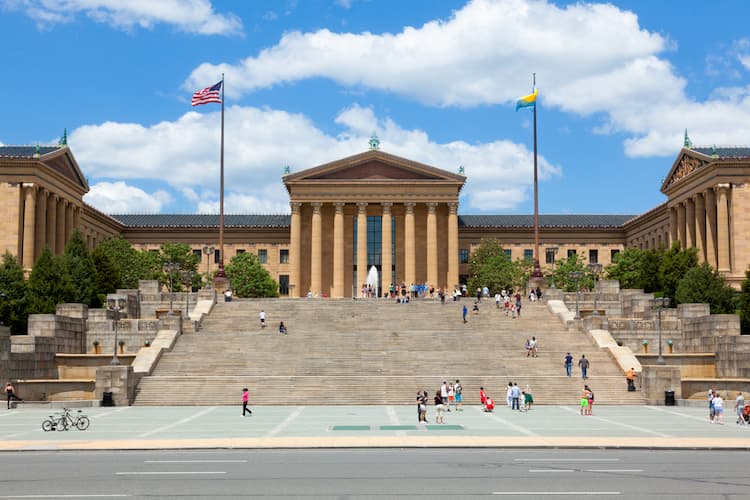 Independence Hall and the Liberty Bell welcome many school groups each year, but they’re not the only field trip destinations that Philadelphia boasts. The city also has many museums that are popular with students, like the Philadelphia Museum of Art and the Franklin Institute.

The Philadelphia Museum of Art hosts a wide array of exhibits, like African American Art, European Impressionism, Arts of the Islamic World, and South Asian Art. The museum also features the famous “Rocky steps” and their accompanying Rocky statue--so of course you’ll need to get a picture.

If you teach science, you can take your students to the Franklin Institute, named for Philadelphia’s most famous inventor. Let them walk through the “Giant Heart,” play with trains and tracks in The Train Factory, or experiment with physics in Sir Isaac’s Loft. When you’re finished exploring, your driver will be waiting for you with a comfortable, climate-controlled bus.

Charter bus parking: Your driver can pick you up and drop you off at the driveway of the west entrance to the museum. They can then take the bus to the Callowhill Bus Center.

Charter bus parking: Drop-off and pick-up is available in front of the museum on the west side of 20th Street. Your bus driver can then park at Callowhill Bus Center.

Book a Bus for Your Next Trip to Philadelphia

Learn about American history, cheer on the Eagles, or explore The Franklin Institute during your group outing in Philadelphia. If you need a modern mode of transportation with reclining seats, panoramic windows, and climate control, call Shofur at 1-800-436-8719 to book a charter bus for your students or corporate group.

Prices for Charter Buses and Minibuses in Philadelphia

Prices displayed here are estimates and may not reflect the price of your bus rental. The only way to get an accurate quote is to call our 24-hour team at 1-800-436-8719.

Nearby Cities you can Visit with